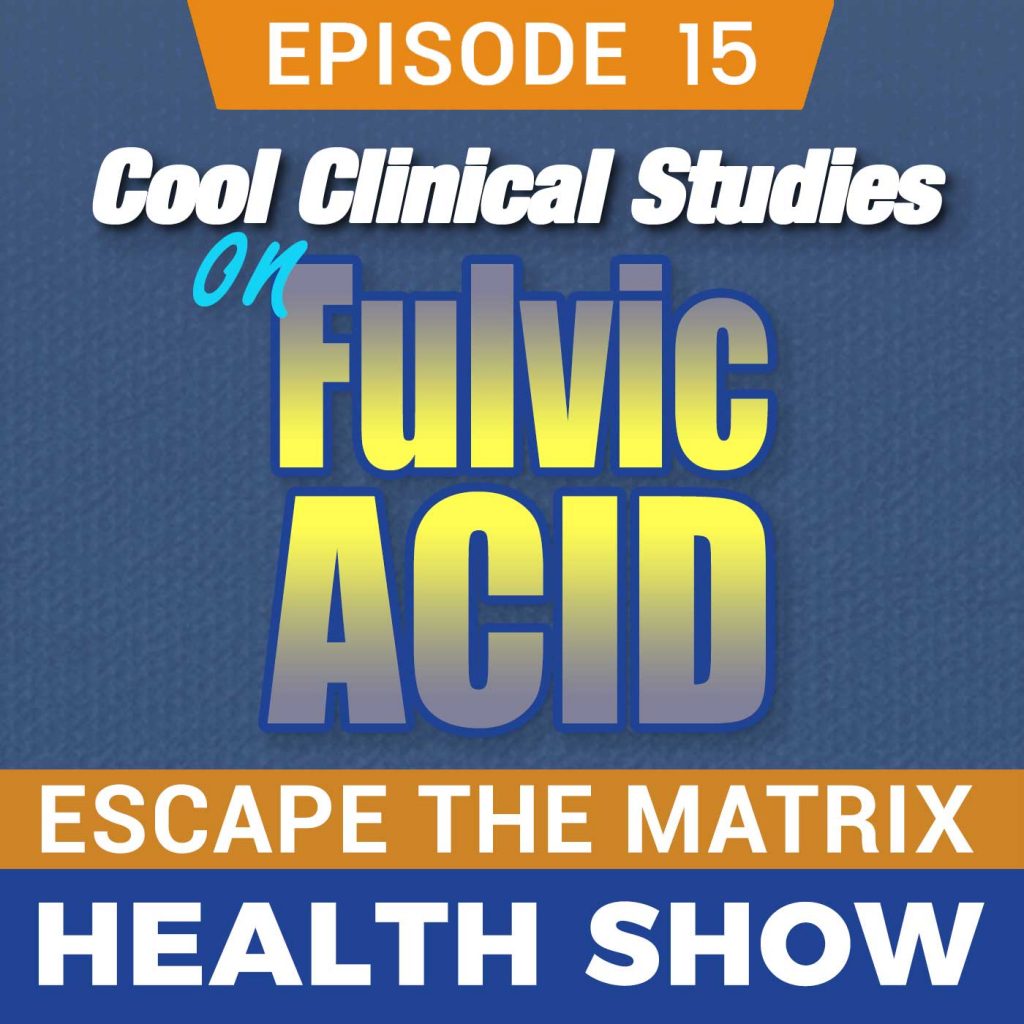 Fulvic Acid is a naturally occurring organic compound usually found in soil and plants. It is recognized for its ability to balance and energize cell life and biological processes.

Nutrient uptake is more efficient because of Fulvic Acid. With better nutrient uptake cell respiration and energy production increases helping to bring the body back to full function. 2

“Fulvic acid holds the keys to healing and preventing the world’s diseases…. In a more perfect world, fulvic acid can reverse the steady cycle of health deterioration, and start a new cycle of progressive health improvement.”1.

What the clinical study state it does (main benefits)

Notes for this study:  Over 50% of hospital patients noticed that they were able to sleep more relaxed when treated with fulvic acid, a humic extract. Improved sleep came as an added benefit since the patients were already being treated with the fulvic acid for various chronic diseases. –  Bingwen Su, Jiangxi Humic Acid, 3 (1985), as in: Application of Fulvic acid and its derivatives in the fields of agriculture and medicine; First Edition. June 1993; IHSS, Sevilla, Spain. 3.

Notes to study: A 2011 study published in the Journal of Alzheimer’s Disease found that fulvic acid has several antioxidant, nutraceutical properties with potential activity to protect cognitive impairments, including Alzheimer’s disease. Fulvic acid is likely to provide new insights in the development of potential treatments for Alzheimer’s disease using natural products.

Notes for this study:
Carbohydrate-derived Fulvic Acid significantly improved some aspects of eczema. The results of this small exploratory study suggest that CHD-FA warrants further investigation in the treatment of eczema. 6

Study 5: Prevents Tumor progressionNotes to study: Patients with cancer causing tumors of the esophagus had 100% success rate in preventing tumor progression into the cancerous state when treated for two years with a humic extract solution. – by Yuan, Shenyuan  Tongren Hospital, Beijing; Fulvic Acid, 4 1988; Book: Application of Fulvic acid and its derivatives in the fields of agriculture and medicine; First Edition: June 1993 7

Notes to study: Studies have found that humic acids have ion-selective electrodes that can be used for attracting heavy metals — even for filtering soils and water because they help bind to things like copper and iron. 8

How it works
As a supplement made for human consumption, fulvic acid can be found in liquid form and also as a solid, mineral substance. It’s able to easily pass through cellular membranes, allowing it to be properly absorbed and also boosting assimilation of other nutrients or supplements.

Its structure is made up of aromatic, organic polymers with many carboxyl groups that release hydrogen ions, resulting in an electric charge that helps attract free radicals, heavy metals and other toxins within the body, allowing it to act like a detoxification agent. Once it becomes reactive with metals, fulvic acid helps them become more soluble in water, which means they’re carried out of the body more easily. 9

Fulvic acid is a great way to get rid of heavy metals because [it goes] inside the cell, grabs the metal, pulls it out, hands it off to the humic, which then takes it out of your body. In intravenous chelation, the chelating materials can only get to extracellular things, because they won’t go inside the cells where almost all the metals reside.10

How to Take
There’s some evidence that fulvic acid is more bioavailable when taken in liquid form. Most liquid products come in extract form and require using about 12 drops at a time with 16–20 ounces of filtered water. Taking fulvic acid depends on if you take medications and when you eat. It’s a good idea to take fulvic acid around the time of eating since it counteracts and detoxifies contaminants — such as pesticides, chemicals, etc., found in foods that are not organic.

Try to keep it in your system, taking morning, mid day and evening is excellent, but if not at about 12 hour increments is great, like 8 AM and 8 PM.

Where to find it
Some foods that contain Fulvic Acid are Organic Vegetables, Blackstrap Molasses, Shilajit, such as Dirobi Shilajit, and Mineral Supplements such as Mimi’s Miracle Minerals. 11Get 15% off in our store, plus Matrix Moolah, using code MMM15 here.
https://dirobi.com/products/mimis-miracle-minerals-2oz
Get a discount code on our 2 or 4 ounce bottle on Amazon or our store using code: 15OFFMMI
References:
1. http://www.enerexusa.com/articles/fulvic_humic_acid.pdf
2. http://www.doctorsbeyondmedicine.com/listing/fulvic-acid-benefits-research
3. http://www.bioag.com/images/fulvic_china_book.pdf
4. http://www.enerexusa.com/articles/fulvic_humic_acid.pdf
5. https://www.ncbi.nlm.nih.gov/pubmed/21785188
6. https://www.ncbi.nlm.nih.gov/pmc/articles/PMC3173016/
7. http://www.enerexusa.com/articles/fulvic_humic_acid.pdf
8. https://www.ncbi.nlm.nih.gov/pubmed/16082962
9. https://draxe.com/fulvic-acid/
10. https://articles.mercola.com/sites/articles/archive/2017/09/17/body-voltage-dictates-health-and-disease.aspx
11. https://www.livestrong.com/article/34898-foods-fulvic-acid/
See the reviews reference on Amazon here: https://www.amazon.com/Mimis-Miracle-Minerals-Supplement-Supply/dp/B0160CQRBW/
013 Top 10 Holiday Eating Tips (Or, how to keep the pounds off Nov-Jan!) 016 Focus Up! Increase Energy and Performance, with Ken Marsh