Today I am going to discuss how to conquer cravings, and surprisingly the methods I have discovered do not involve struggling against them, or about increased willpower, or developing more mental strength.

Food craving: “A food craving (also called selective hunger) is an intense desire to consume a specific food and is different from normal hunger.” -Wikipedia
There are all kinds of useful techniques for curbing cravings. If you do a Google search you will find all kinds, like…
– Eat a protein when you’re hungry instead of carbs.
– Drink plenty of water
– Get plenty of sleep
– Chew gum etc.And these techniques are useful, but what’s better is to deal with the underlying cause of craving.***Note that our Dirobi Un-Diet is a free, simple, and easy way to eat that naturally helps you eliminate cravings after dinner, a time when many people cave in to harmful food cravings. Nobody craves broccoli after 7 PM 😉 Check out the Dirobi Un-Diet here.***
After episode 53 with Jessica Golding, I explained to her how I start the day with good willpower and generally eat really healthy foods until later in the day. Then after dinner, I am most likely to eat stuff I shouldn’t, and too much of it. I realized this was a weakness I should work on, so I bought I book on audible that has been on my list for some time, The Craving Mind Judson Brewer MD. 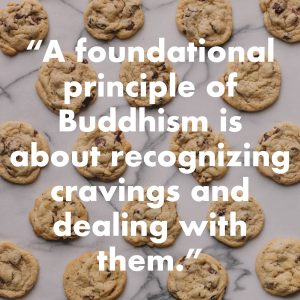 Director of Research, Center for Mindfulness
Ted Talk https://www.ted.com/talks/judson_brewer_a_simple_way_to_break_a_bad_habit
A Simple Way to Break a Bad Habit.App: Eat Right Now
Also make: Unwinding Anxiety
Craving to Quit (smoking)The Craving Mind by Judson BrewerA foundational principle of Buddhism is about recognizing cravings and dealing with them.It’s also so much more meaningful than techniques or tricks because it causes lasting change and true life improvement in almost all other areas. 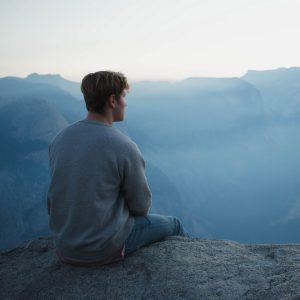 Last year my son Tyler took a course in Transcendental Meditation. We thought it was a bit odd, expensive, and quirky for a college student to do that kind of thing. Since then he has been surprisingly dedicated, meditating for 20 minutes morning and night. And over the months I have seen the change in him.

In neuroscience, the default mode network (DMN), also default network, or default state network, is a large-scale brain network of interacting brain regions known to have activity highly correlated with each other and distinct from other networks in the brain.[3]

The default mode network is most commonly shown to be active when a person is not focused on the outside world and the brain is at wakeful rest, such as during daydreaming and mind-wandering.

-It’s actually very hard to pay attention to things. About 50% of us will drift off mentally, even while listening to a talk or watching something.
-It’s about positive and negative reinforcement.
-It’s about the reward center of the brain. See food, eat food, feel good, repeat.
-Trigger, Behavior, Reward.
-The brain then notices that eating makes you feel good. So the cycle becomes Feel bad, eat food, feel bad.
-So the triggers change from survival to lifestyle stuff.
-Mindfulness training proved twice as good at quitting smoking than The Gold Standard Therapy.
-They were instructed to continue smoking, but be mindful while they smoked.
-Just by being curiously aware while smoking, they found it to be something that tasted like chemicals and smelled like crap.
-Our pre-frontal cortex understands that we shouldn’t smoke, and cognitively we fight bad habits like smoking.
-The problem is the pre-frontal cortex is the first thing to get shut off when we are under stress.
-Mindfulness is about getting curiously interested and turn towards our experience, rather than fighting our experience.
-Curiosity is naturally rewarding. When we get curious, we notice what the cravings are made up of, simple sensations in our body that come and go.
-When we are curious we step out of our primal states and into our higher levels of thinking.
-The Default Mode Network quiets down during mindfulness training. Not just when the person is being mindful, but people who meditate have this higher level of control at all times.-Notice the urge, get curious, feel the joy of letting go, repeat. 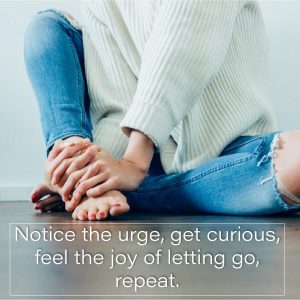 -Part of the problem we deal with is a disconnect between our minds and bodies. Sometimes our bodies don’t crave food, but our mind does. Simply improving the connection between mind and body can make a big difference.-A full body scan is a great way to increase this connection. Starting with the toes of your left foot, simply pay attention to the physical sensations of each toe. Then the top of the foot, then the bottom, then the ankle, and so on up that leg, then the other leg, then hips, torso, left-hand right-hand, neck, and head.-Should take 5-10 minutes, and at the end, you will notice you have become very relaxed and in a more mindful state, and if you had tension in muscles, much of it will be released.Action items from this episode:
1. Add a mindfulness practice to your daily routine. It doesn’t have to be a fancy incense smoking affair. Simply stopping, sitting, and observing your breathing for 5-10 minutes makes a difference.
2. Buy an app like Headspace and do guided meditations. It’s inexpensive and studies have shown that it makes a difference in your mental and physical health.
3. Buy the book or audio version of The Craving Mind.
4. Get the app Eat Right Now.
5. Eat all food, but especially unhealthy foods, as mindfully as possible.
6. Generate the habit of analyzing your cravings in an intellectually curious way. Just observing them reduces their power over you.
7. Do a full body scan as part of your meditative practice.
8. Listen to The Secular Buddhism podcast. It doesn’t matter what your background or religious tradition is, this non-metaphysical approach to Buddhism will help you become more mindful.So there you have it…

And I can’t help putting in a shameless plug here for two of our products that help with cravings. Both Pounds and Inches Drops, our top selling weight loss drops, and Mimi’s Miracle Multi contains 1000 MG of Chromium GTF, with clinical studies showing it helps with weight loss, blood sugar, and lower cholesterol.

Check them out at Dirobi.com. 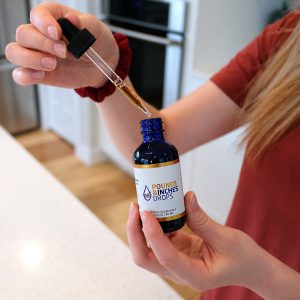 Also, make sure and check out the show notes for this episode, episode 55 on the blog at Dirobi.com for links to the ted talk, book, and apps mentioned in the episode!

Until next time, this is Dave Sherwin wishing you health and success!

Right-click here and save as to download this episode to your computer.

Note that this information is presented as educational in nature and is not intended to diagnose, treat, or cure or prevent any disease.

054 The Paradox of Multivitamins 056 Cravings Part Deux. The RAIN Method

Train With a Purpose: The Deeper Ideals of Health, Wellness and Functionality With Jonathan Simos

Dealing with Stress and Burnout… the Success Killers.