90 Essential Nutrients You Need Every Day

According to a $25,000,000 study, there are 90 essential nutrients we all need, every day to provide optimal health. Learn what they are, and how to prevent deficiencies in this article and infographic!

From this work his team determined that there are 60 minerals, 16 vitamins, 12 amino acids, and 2-3 fatty acids that are optimal for human health; if we could get these 90 nutrients in our diet every day it could drastically improve our health.

Listen in as Dr. Shane Harada, nutritional expert on the 90 essential nutrients, helps you understand the what, why, when and how of this cool nutritional ideology!

The best source of nutrients if real food, of course. Here’s a few high level tips to help you do that:

Get 5-9 servings of fruits and veggies daily

Try to get a full cup of mixed berries every day, they are rich in antioxidants, phytochemicals, vitamins and minerals!

Eat a balance of healthy carbs, fats and protein with every meal whenever possible.

Supplements that ensure you get your 90 essential nutrients

It’s extremely difficult in western society to eat a perfectly balanced diet that includes healthy forms of all the nutrients. 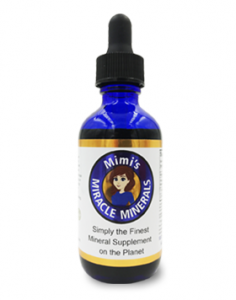 These three high-end supplements will make sure you get all the vitamins, minerals, and omegas you need…

Mimi’s Miracle Minerals contain over 70 trace minerals. People report having better hair and nail growth, more energy, and strengthened immune system when on this product. “Every one else in the office got sick but me” is a common testimonial. And as a nice side benefit, this product is about half the price of similar products on Amazon, some of which contain less nutrients!

Mimi’s Miracle Multi contains those vitamins and nutrients that people are highly likely to be deficient in, and are difficult to get from diet. Most multivitamins have plenty of stuff you don’t need, not enough of what you do need… and in a low quality form. 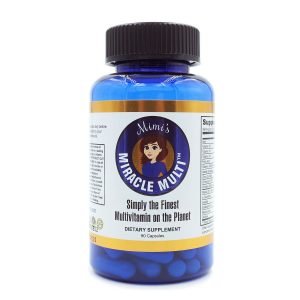 Fatty Omegas are three of the most important nutrients in the list of 90. And research has shown that plant based omegas are more readily utilized by your body than fish based. This interview with Dr. Jeff Matheson, one of the worlds leading inflammation and pain management experts, is amazing in some of the evidence and case studies he shares about this.

In one case, a lady waiting for a liver transplant was sent to him for pain management while she waited for her new liver. He put her on a pain management protocol with high doses of Pure Form Omegas as the primary method. Five months later and Voila! She no longer needed a liver, it had healed itself. 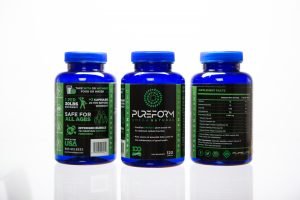 If we didn’t hear it from such a credible physician we would find it hard to believe.

What is the back story of the 90 Essential Nutrients and Dr. Wallach?

Originally, Dr. Wallach was a veterinarian by training and became famous for his participation on Mutual of Omaha’s Wild Kingdom, a very popular television show. 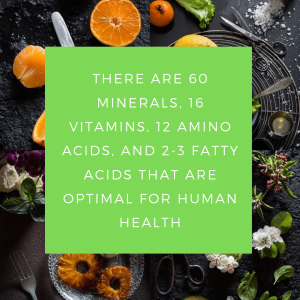 Dr. Wallach was instrumental in determining some of the nutritional and environmental problems these animals faced, and was able to drastically improve the health of the animals.

The animals were largely deficient in nutrients, and once those nutrients were put back into the diets of the animals, the health improvements followed.

And the more he learned, the more he realized that humans had many of the same problems as the mammals he was treating, so he started studying similar issues with humans.

They also did 10 million blood chemistries studying animal and human cells under the microscope. One of the things they looked for was disease found in those cells. So one of his specialties was pathology at the cellular level.

This work is currently held at the Smithsonian Museum, and from his research also came his blockbuster book, “Dead Doctors Don’t Lie.” And of course the 90 Essential Nutrients concept.

So What are the “90 Essential Nutrients?”

The next category are vitamins and there are 16 vitamins.

What Happens If We Are Deficient In These Nutrients?

There are approximately 900 different diseases that are directly associated with vitamin, mineral, amino acid and essential fatty acid deficiencies. 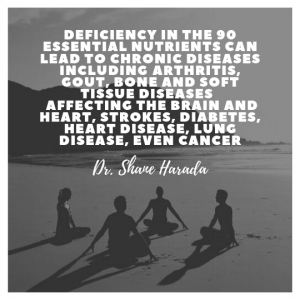 These 90 essential nutrients are essential in helping prevent basically every chronic disease that’s in all of the first and second and third world countries, including the likes of arthritis, rheumatoid arthritis, gout, bone diseases, soft tissue diseases that effect the brain and heart, that includes strokes, diabetes, heart disease, lung disease, most forms of cancer, and the list goes on and on and on in these 900 diseases.

Essential minerals are pretty much the most important category that many people are deficient in.

One key to minerals lies in the taste of our food.  The fruits and vegetables that you taste that are the most sweet typically have the highest mineral content, which makes them sweet and desirable to the human body. Likewise to all of the animal population that eat those fruits of vegetables. 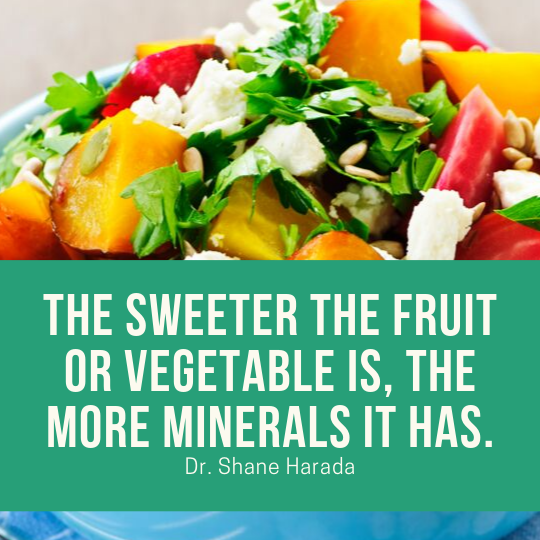 That is why those fruits and vegetables become desirable to humans and all wildlife.

Interestingly, on the flip side, the bugs, worms, and parasites are typically not as prevalent in those crops that have higher mineral content.

The minerals to help prevent diabetes, and for blood sugar regulation include, chromium, vanadium in zinc. Those are three minerals that are primarily in the regulation for blood sugars that help the pancreas with insulin levels, but more importantly to help the cells actually utilize the sugars better.

What are the Best Food Sources for these Minerals?

That is such a fantastic question. I totally agree with this philosophy, food first. However, obviously what you and I are both finding is that the nutritional components in the essential nutrients that are supposed to be in foods are definitely lesser than they used to be even 15 years ago. And much lower than 75 or a hundred years ago. We’re just not getting the nutritional content. [Learn more about this in a previous post, “The alarming global nutrient collapse.”]

However, we need to eat plenty of greens. Those are fantastic. Spinach, Kale, Chard, all of the deep Greens and things that we would include in a green smoothie.

Many of the berries are obviously high in antioxidant and those have a high mineral content typically as well, especially if they’re sweeter, then they have a higher mineral content. So those are the kinds of foods that I look at. Greens, salads, peppers, berries, and there’s also minerals in red meats, liver and bone broth.
Listen to the podcast interview with Dr. Shane to get the whole story…

How About The Top Essential Vitamins?

Most of the same foods that we just discussed are high in vitamin content also. So again we point out the importance of having a balanced diet. And what I’ve seen in most research is that lower carb is much better as well because most of the grains are higher in calories than they are in nutrients. So if you want a higher nutritional component, then eliminate much of the grains and go for more of the higher protein and higher healthy fat foods as well as the fresh fruits and vegetables.

Amino acids are so vital in the repair of specific tissues such as a bone and ligaments, tendons, joint structures and cartilage. So for helping people avoid degenerative joint diseases, that’s where all of the amino acids come into play. 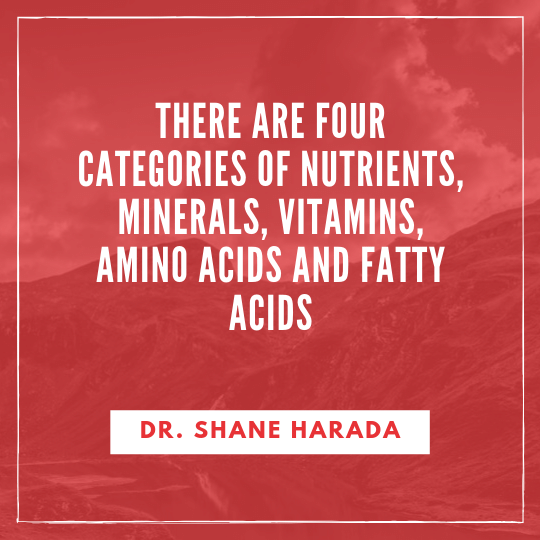 Some of the best sources for amino acids are eggs and other different protein sources. Whey protein isolate is fairly pure depending on where the manufacturer is getting it from. Collagen type supplements and bone broth supplements are very high in amino acids as well as minerals. And there are certain fruits and vegetables that can actually help in the absorption of those amino acids as well. So again, we come back to the healthy fruits and vegetables to help synergize and to be able to absorb the amino acids properly.

Conditions such as Alzheimer’s, memory loss, Parkinson’s, high cholesterol, all of those conditions that are related with essential fatty acids are increasing.

It is becoming more and more prevalent as we get farther and farther along in this low fat and a fat restricted diet.

So a Dr. Dan Murphy, who is very well respectred in the chiropractic industry, was a keynote speaker at a recent convention, and he brought out a scientific study that showed that for the average American, the essential fatty acids are required at a clinical level. 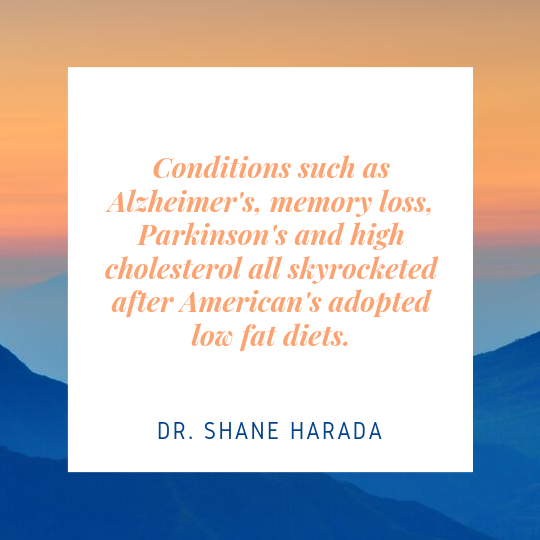 Now a clinical dosage means it’s higher than your maintenance, or healthy dose because you are increasing the dosage in order to start making up for the deficiency. That’s the similar concept as having a higher rainfall amount after a drought in order to restore the lakes and the streams.

On Fatty acids and Cholesterol

So there you have it! 90 Essential Nutrients you should eat every day, with food and supplement sources. And big thanks to Dr. Shane Harada for doing the interview about it!
Listen to the interview here:

His Mother taught the benefits of herbs and natural healing through her example and practice.  During the later high school years, he had an injury to the low back that caused severe pain with most physical activities that involved the core/lower back.  Some 15 years later, while attending chiropractic school, it was discovered that the injury had fractured the growth plate.  Dr. Shane opened his first clinic in Southern Utah soon after graduating in 2003.  After more extensive study and application in clinical nutrition, and nearly 25 years following the injury, the low back was completely healed.  At this point he has assisted thousands of individuals through chiropractic, clinical nutrition, acupressure, weight management using hcg and ketogenic diets, kinesiology, and other Holistic methods.  These experiences, combined with the science, materials and writings of many individuals, has brought together what is called The Harada Method.

Train With a Purpose: The Deeper Ideals of Health, Wellness and Functionality With Jonathan Simos